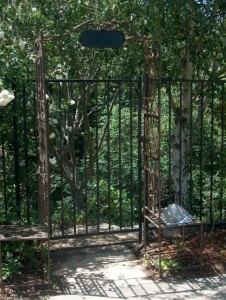 The idea for our garden occurred during a visit to the Wild Garden section of the Bodnant Garden, which is near Betws-y-coed, Wales, (which is in the Snowdonia National Park.) We enjoyed the created natural feel and we were convinced that this was a perfect model for a California garden. So in looking for land in 1987 to build our home, one of the property’s critical features was that it must have a gully that could be transformed into a natural garden. 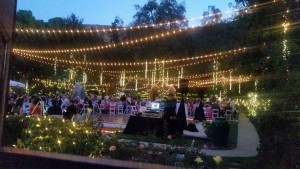 When we started working on our garden in 1990, it was bare dirt. Pictures in the history section tell the early story of the garden. Almost all the plantings in the garden have been from seeds, cuttings, or seedlings.

The three pictures on this page were taken at different times. The first of the Garden gate was taken during a Charity garden tour on May 16, 2004.  The backyard with the hanging lights was during our daughter Jenee’s wedding reception on Sept 26, 2015.  The header is from aerial shots done by a ballon in 2005.

The California drought from 2012 to 2016 put many of the non-native trees under stress, and by 2015, they started dying. Eventually, we lost about twenty mature trees.

There are captions on most of the pictures that tell the story of the garden.   The website has been converted to WordPress, but I still need to update many of the pictures and fix some of the navigation.

This site uses Akismet to reduce spam. Learn how your comment data is processed.